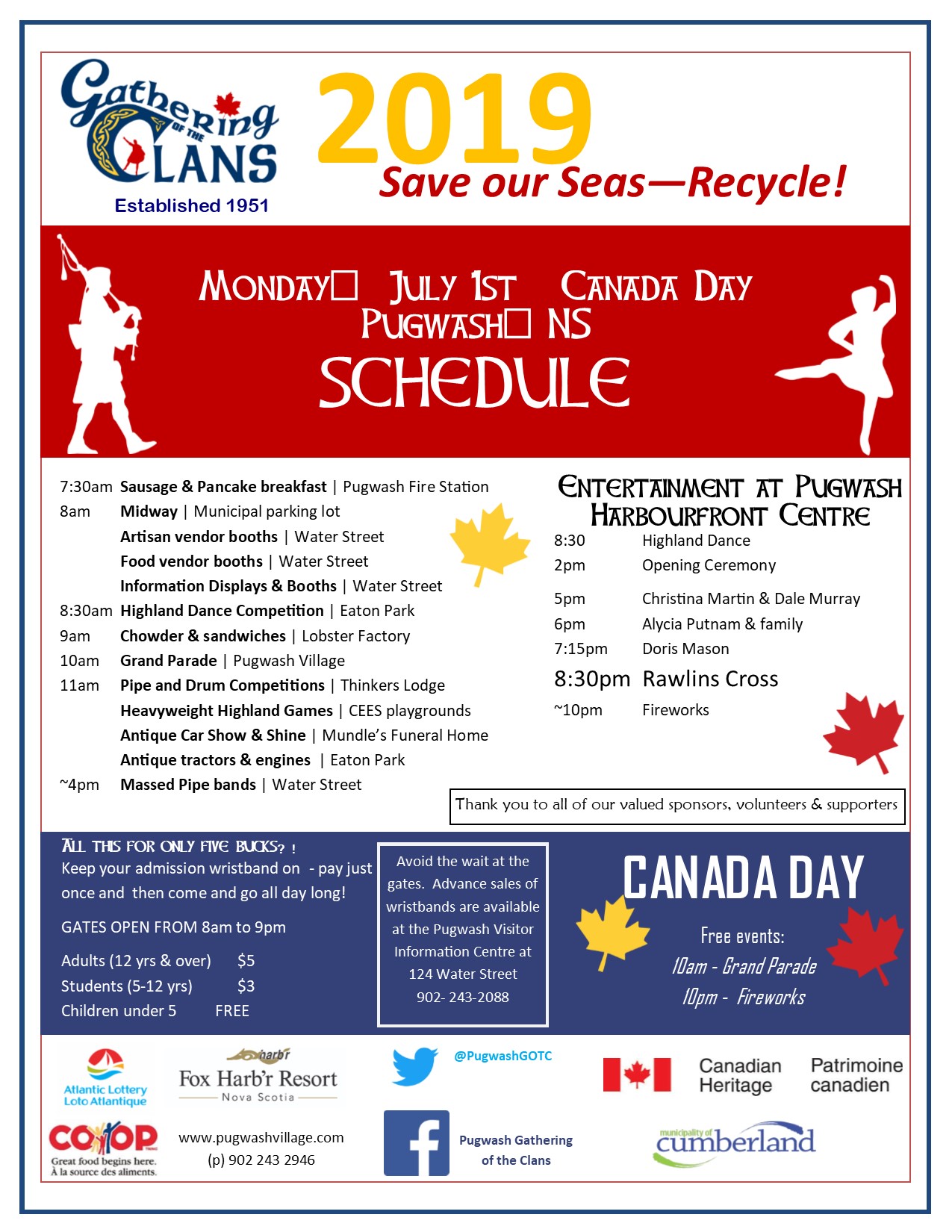 The Gathering of the Clans has become the traditional way to spend Canada Day in Cumberland County. It is a party, Scottish style, with piping, drumming, highland dancing, highland games, artisans, midway, concerts, food and artisan vendors.

Early in the morning, local and international highland dancers take to the Eaton Park stage for ScotDance sanctioned competitions.  Lovers of Pipes and Drums will enjoy the ACPBA sanctioned competitions on the grounds of the national historic site, Thinkers Lodge.  At the Cyrus Eaton Elementary School,  steely muscled men dressed in their kilts, toss the caber and compete in other heavyweight highland games.  Many of these competitors are Canadian and international champions at their sport.

Animal
Ava Mundle and friends with Girlie the cow

When the pipe and drum band competitions are over, all musicians form a massed band which will march up Water Street as far as the Village Hall.  Band prizes are then awarded. This will be at about 4pm.

The official opening is at 2 pm in Eaton Park, when local, Provincial and Federal representatives are led to the stage by a bagpiper to officially declare the Gathering of the Clans open!

Enjoy a wide range of food and then take in a wonderful afternoon of entertainment in Eaton Park. Wrap up the day by attending the evening's special stage show featuring the best of Maritime musicians and a spectacular Canada Day fireworks display over the waters of Pugwash Harbour.

Entertainers from the area entertain through the afternoon and evening, with internationally known entertainers headlining for the evening on Eaton Stage in Eaton Park.

The Gathering of the Clans is a gated event.  This allows us to keep the festival going with enough left over to donate to local non profit organizations, such as the hospital auxiliary.  The Gates open at 8am and close at 9pm.  The entrance fee is $5 for adults, $3 for students 5-12yrs and under 5s come in for FREE!  There's lots to see and do for everyone in the family - all this just for 5 bucks!?

Traditional Canada Day events go on at the same time as the Gathering, with the Grand Parade at 10am and stupendous fireworks at dusk (about 10pm).  The Parade winds its way along the village streets lined with throngs of people. We fill our parade with pipe and drum bands, floats, fire trucks, clowns, horses and surprises. Canada Day events are FREE

This Scottish festival started in 1951 when four local men, Bill Wilson, Bill Fillmore, Alex Walsh and Herbert Smith wanted to fund raise for the new local Red Cross Hospital. The Gathering became renowned for its highland dancing competition. In 1957, an Act of Nova Scotia Legislature incorporated the "Gathering of the Clans and Fisherman's Regatta."  They chose to hold the events on Dominion Day (now Canada Day) as there were already holiday events being held that day.

The Gathering of the Clans is held every July 1st, unless that day falls on a Sunday, as it did in 2018, in which case it is held on July 2nd.

Everyone is welcome - come out and help us in 2020 celebrate the 69th anniversary of the Gathering of the Clans in beautiful Pugwash by the sea!

Updated regularly as sponsership comes in.

Here's how to sponsor the Gathering of the Clans:

Simply send us a cheque or e-transfer to

Videos and Other Links

For the past several years we have a suggested theme for the Canada Day parade.  There is no requirement to adhere to the theme, but it does go towards the scoring used by the judges.

Past themes have been:

2018 - In and About Northumberland Strait

2011 - Gathering of the Clans Diamond Jubilee

The village of Pugwash has celebrated Canada Day (previously Dominion Day) on July 1st for nearly 150 years.  Celebrations have included parades, family picnics and boat races over the years.  In 1951, the Gathering of the Clans was included as part of those celebrations.

It is a condition of the pipe and drum competition that competing bands must participate in the parade, adding to the spectacle!  Commercial and non-commercial groups put together fabulous floats, decorate vehicles or march in the parade.  The Shriners come with their clowns and tiny vehicles.  The antique tractors and vintage cars sparkle as they parade past the flag-waving crowd.  The animals are at the end of the parade with horse drawn carriages, riding horses and ponies and miniature horses.  Sometimes other kinds of critters come along.  There are prizes for the parade entries, including one for "most humorous".

The fireworks at dusk are another important part of Canada Day.  Huge crowds assemble in the park, on the approach roads and bridges and on the water to watch the best fireworks in the County on July 1st!